Cavan was an ultimately rewarding and beautiful restaurant design project we delivered for the LeBlanc+Smith restaurant group. We worked with the owner on color selections both interior and exterior, plaster restoration, and in creating beautiful decorative finishes. Sylvia T Designs transformed this former day spa into a uniquely comfortable and elegant Uptown New Orleans restaurant. We created an aesthetic and feel that compels guests to spend time enjoying the terrific food, hospitality, and ambiance. 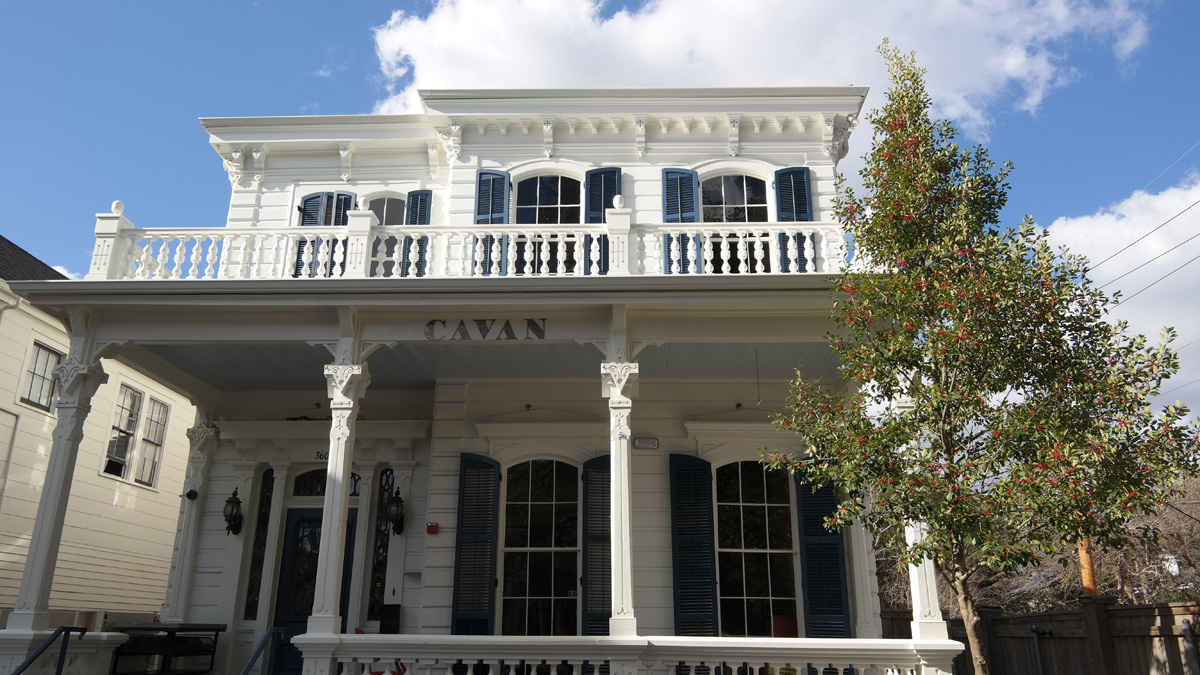 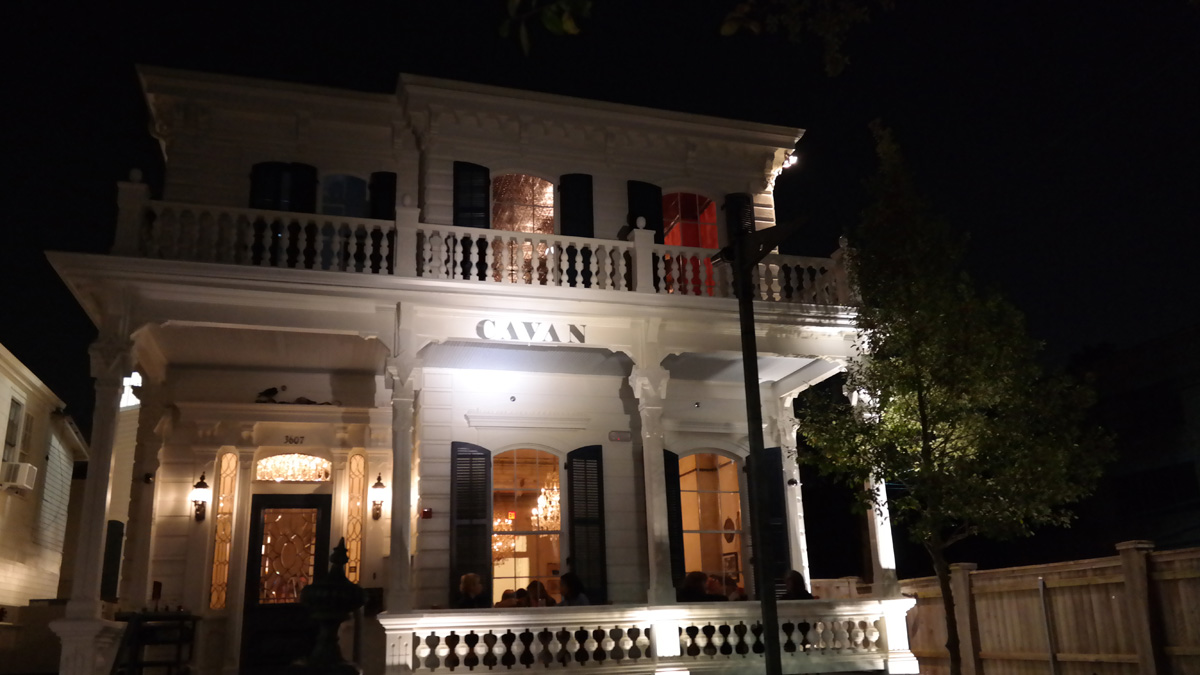 This historic mansion, on what is now Magazine Street in New Orleans, was built in the late 1880’s and was originally part of Jefferson City, which was an area of Uptown New Orleans incorporated in 1850. The style of the house is Neo-Grec, which features simplified and stylized Greek ornamentation.

Areas of the exterior were rotted and needed to be carefully restored. We brought in a fine wood turner to restore the balustrade and shutters. We also delivered professional painting of the exterior and interior of the restaurant. For the exterior, I chose Benjamin Moore OC-17, White Dove and Benjamin Moore 1680 Hudson Bay to emphasize this mansion’s stately appearance. 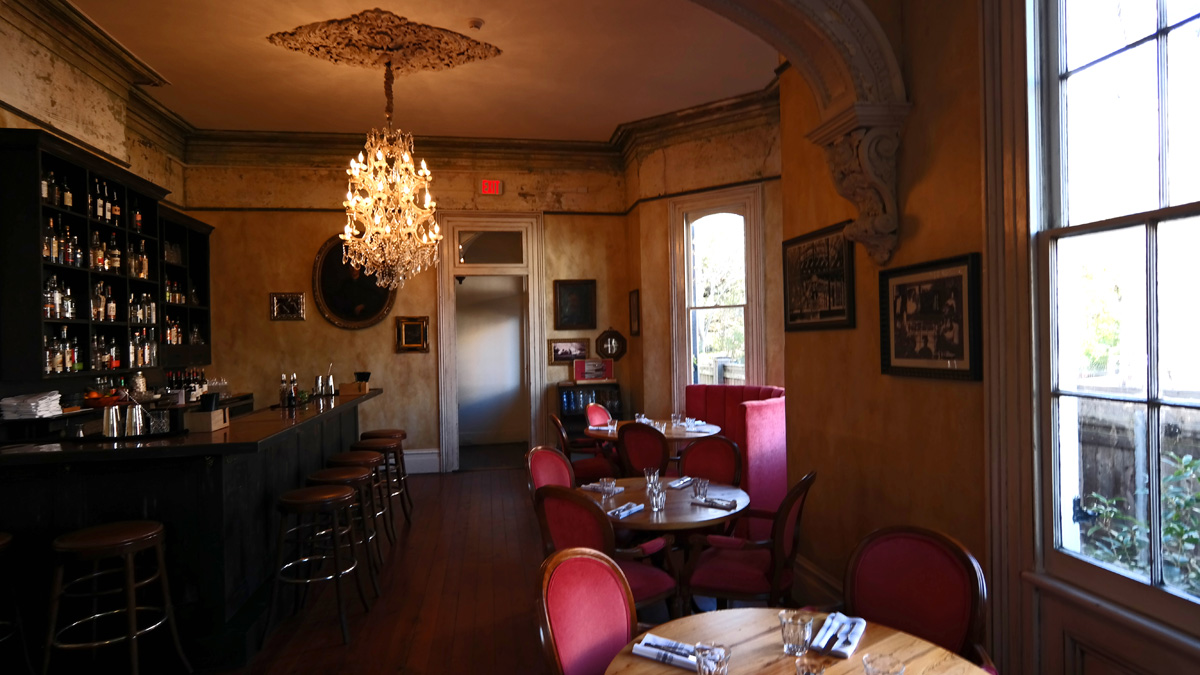 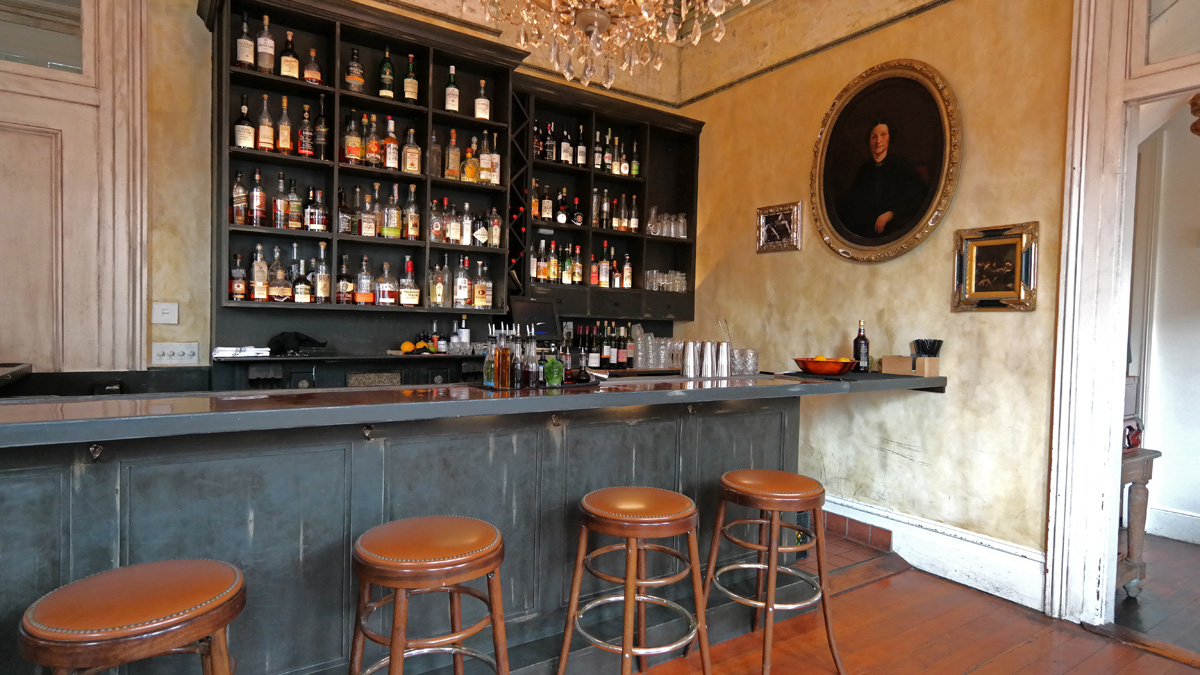 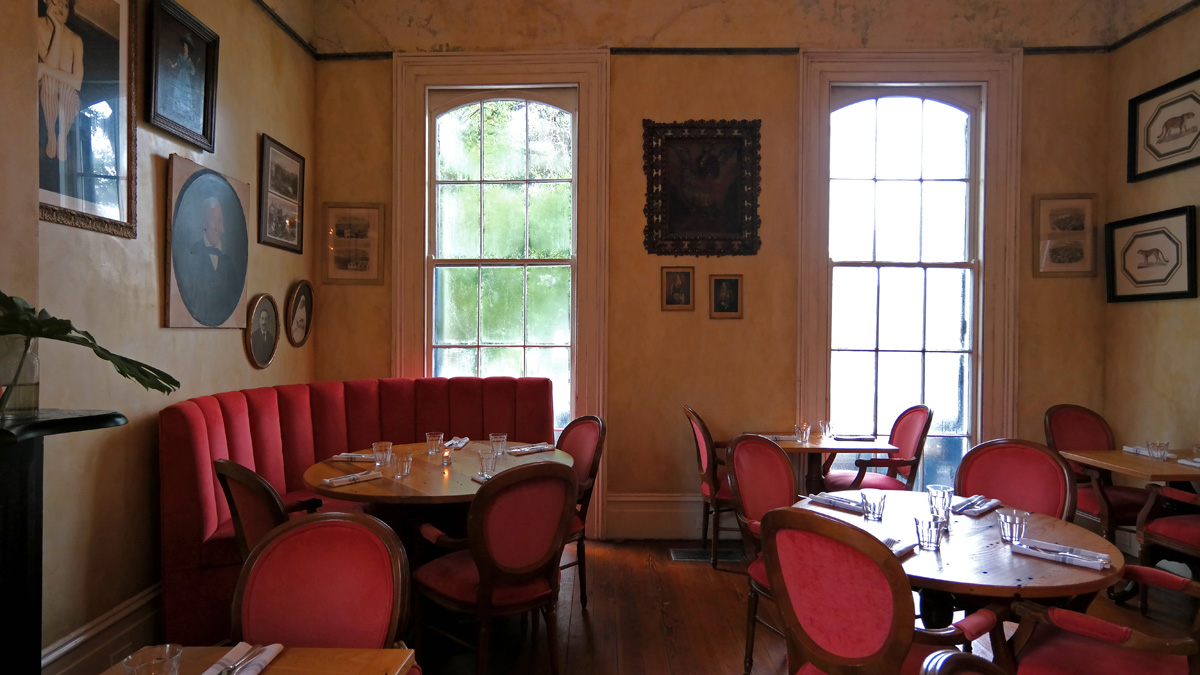 When I first walked through the building, you had to have vision to see all of the beautiful details still present in the decayed original plaster. Part of the challenge was maintaining, improving, and incorporating these desirable elements along with the new ones we created. I thought it important to pick an overall interior color that was largely neutral and would flow with the patina of the original plaster crown molding, the natural lighting, and the crystal chandeliers. Benjamin Moore OC-29 floral white was the perfect choice. 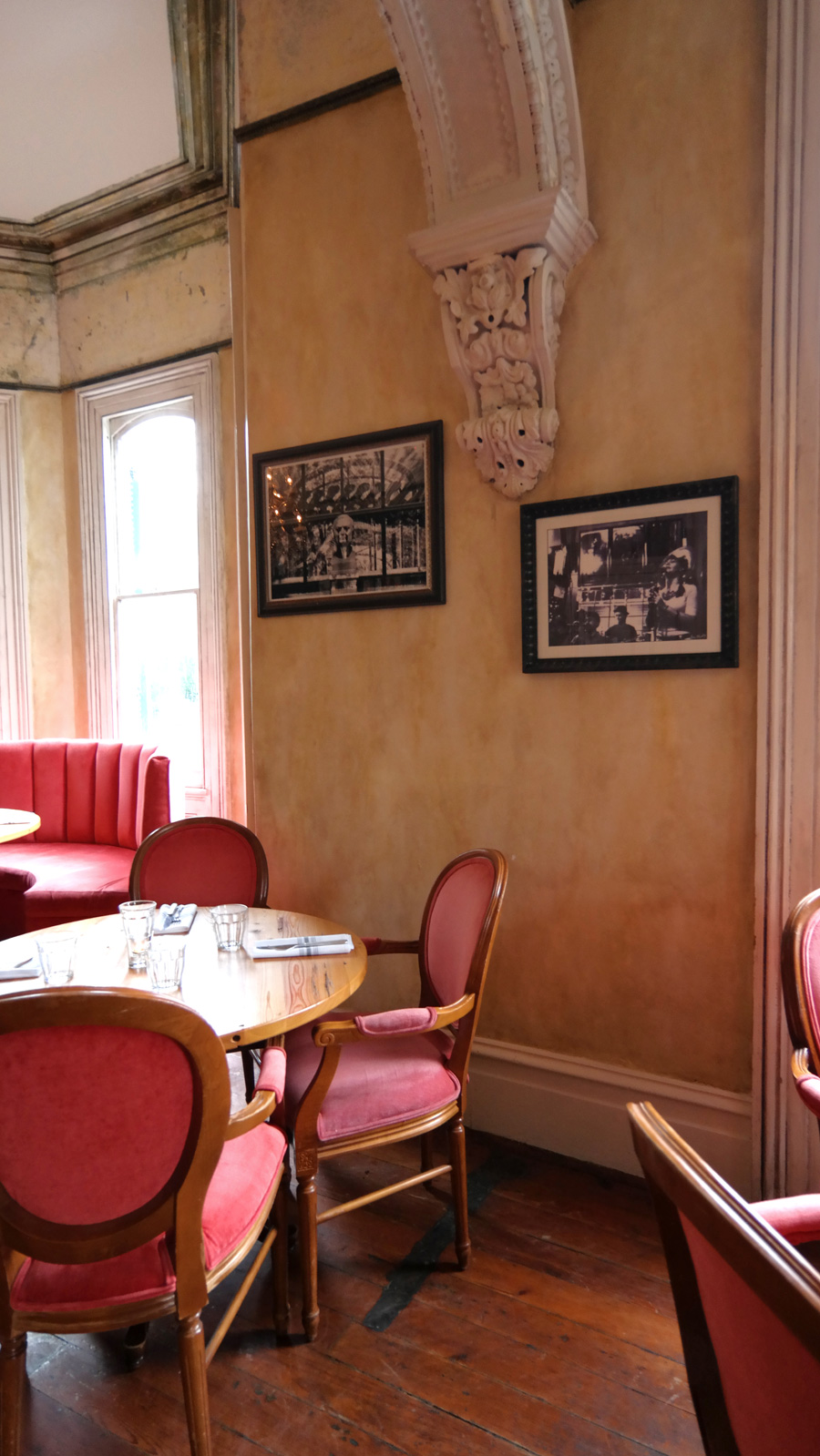 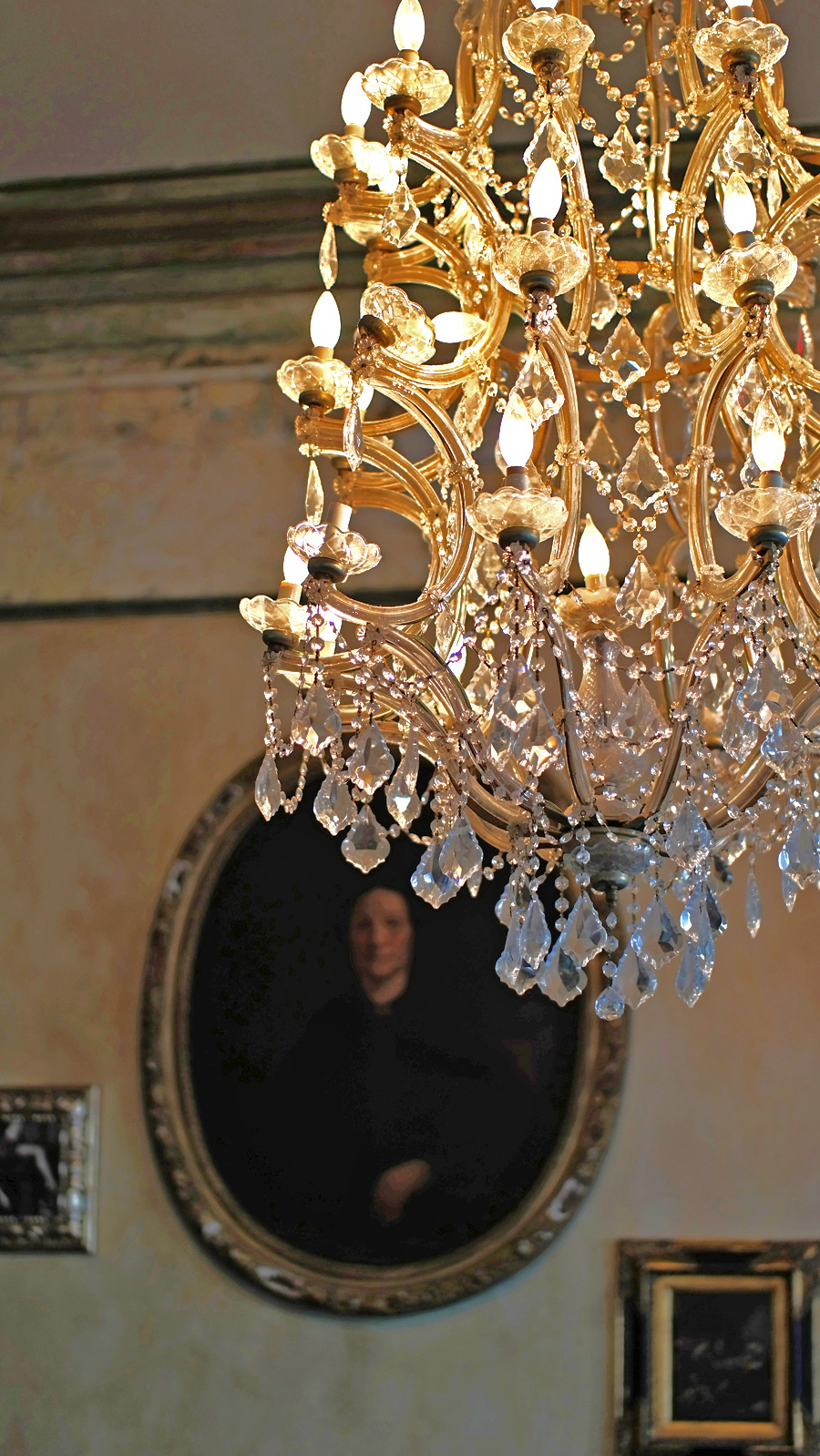 The foyer hall has a beautiful stately stair where we applied a soft metallic plaster with an allover stencil to the underside of the stair. This striking element greets guests as they enter the interior of the space. 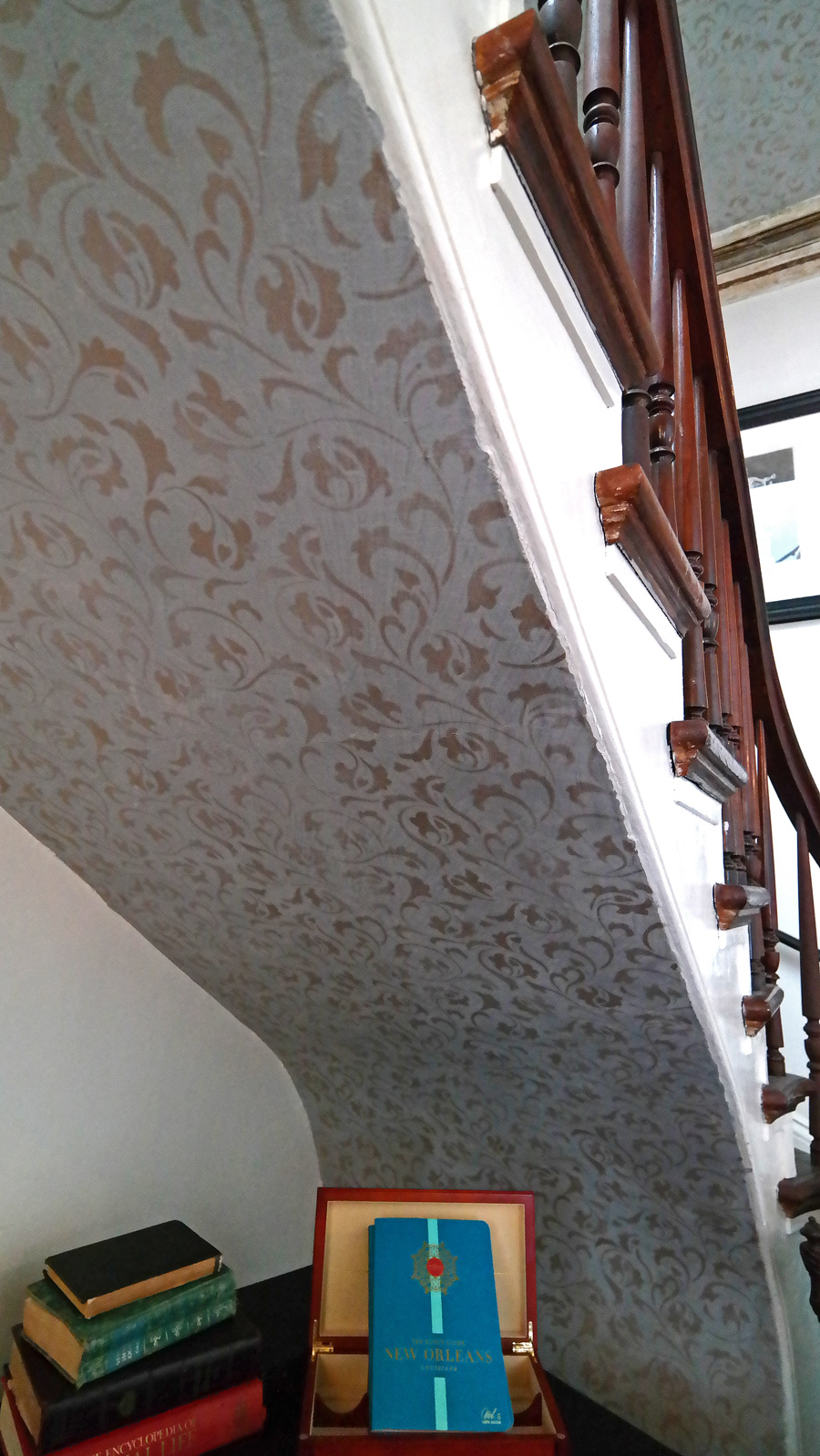 We restored much of the plaster on the wall and ceiling areas in the main dining room. We also restored the original plaster capitals and an original ceiling medallion that had been removed by the previous owners and was broken into pieces. It is now installed in the private dining room where we applied a layered strie’ finish to the walls creating a warm and cozy atmosphere. 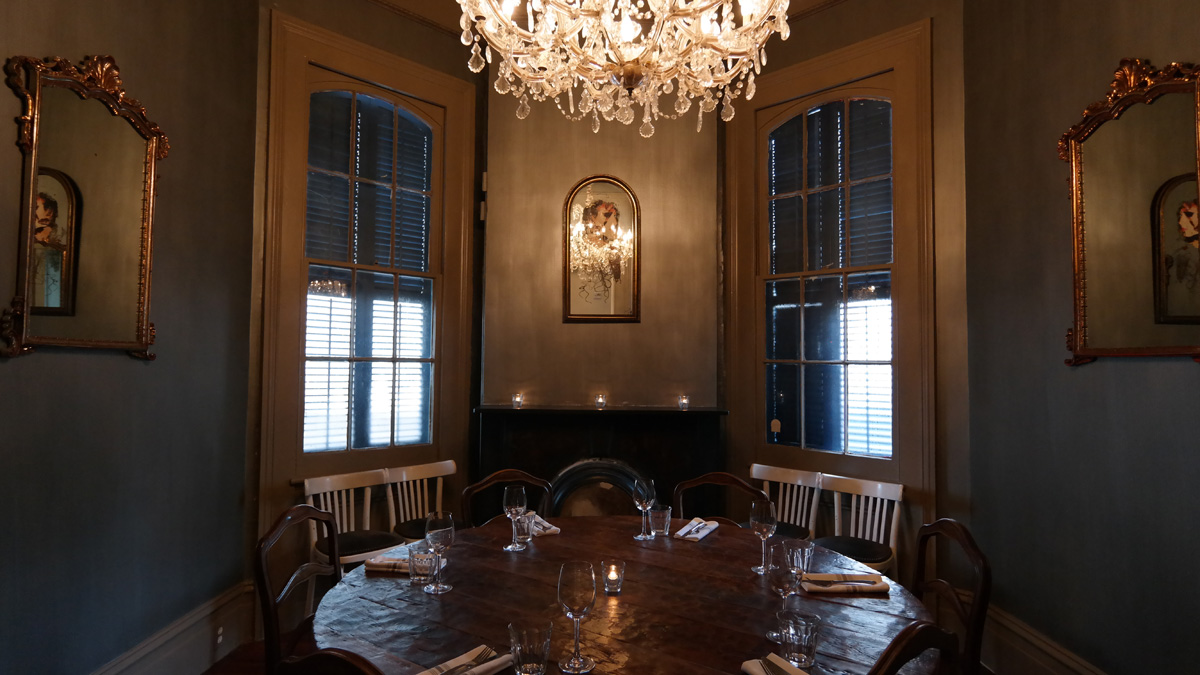 Due to the large scale of the main dining room, we aged the walls and finished the bar in black to make it bold and stately. This helped achieve a cohesive flow between the newly painted walls and the aged patina of the picture mold and crown molding.

We wanted to go bold in the unisex restrooms. In two of the rooms we applied Venetian Plaster in a deep lapis. And in the other two I picked a classic burgundy color and accented the walls with an all-over stencil in metallic silver. 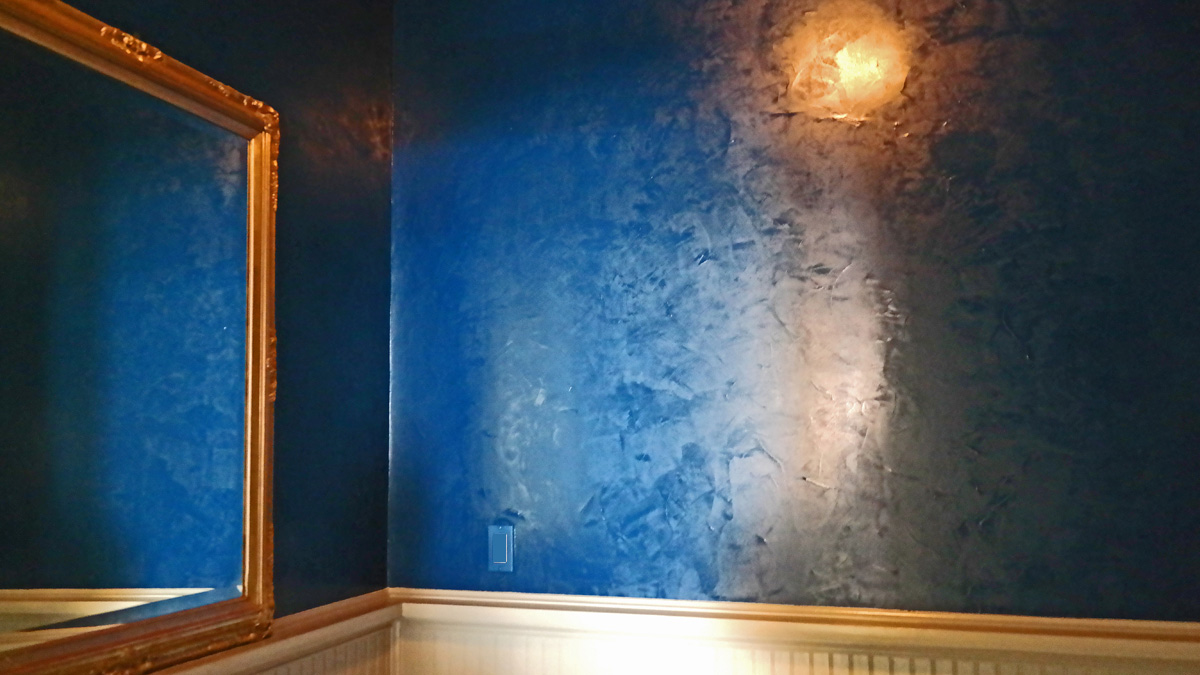 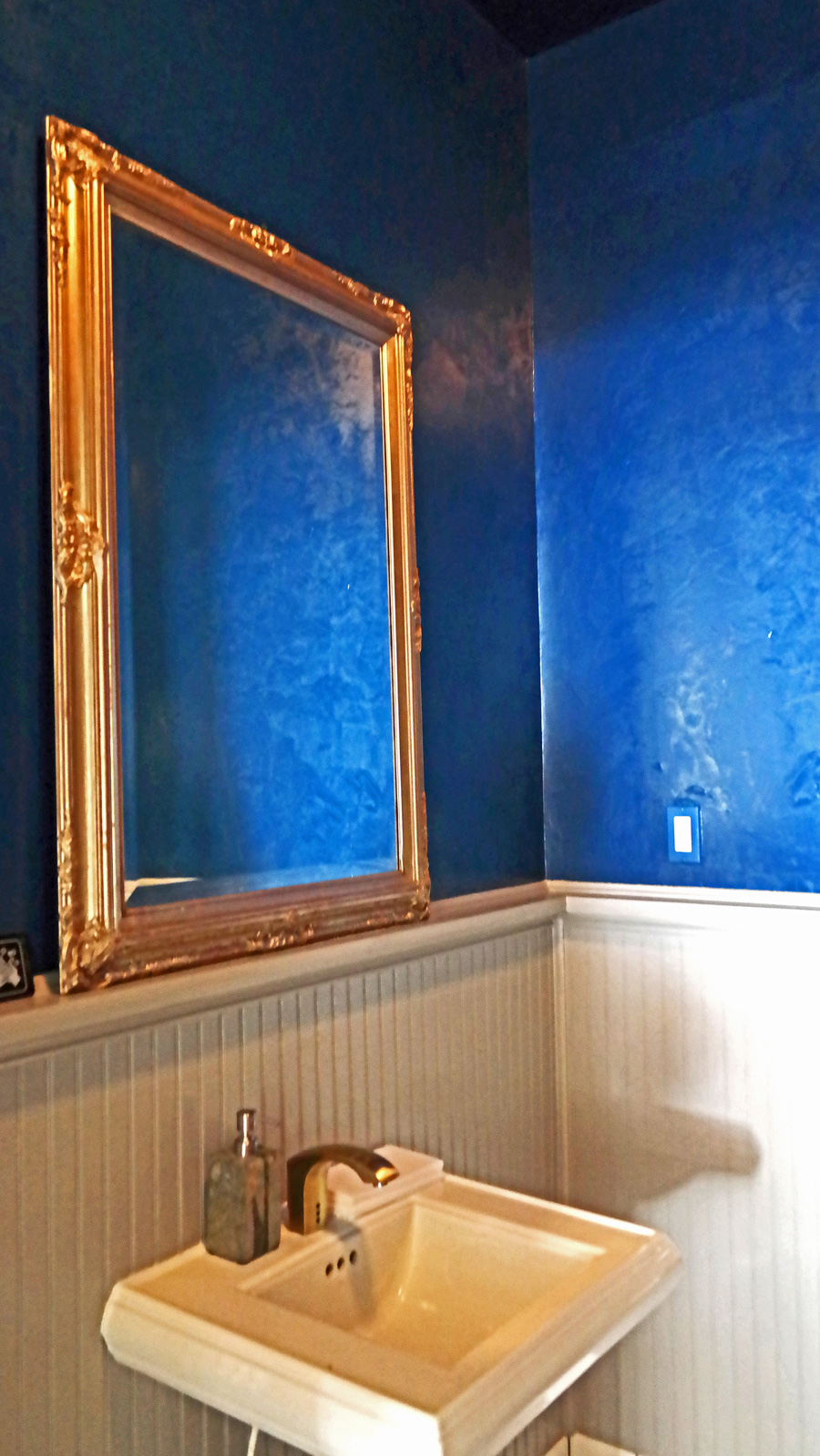 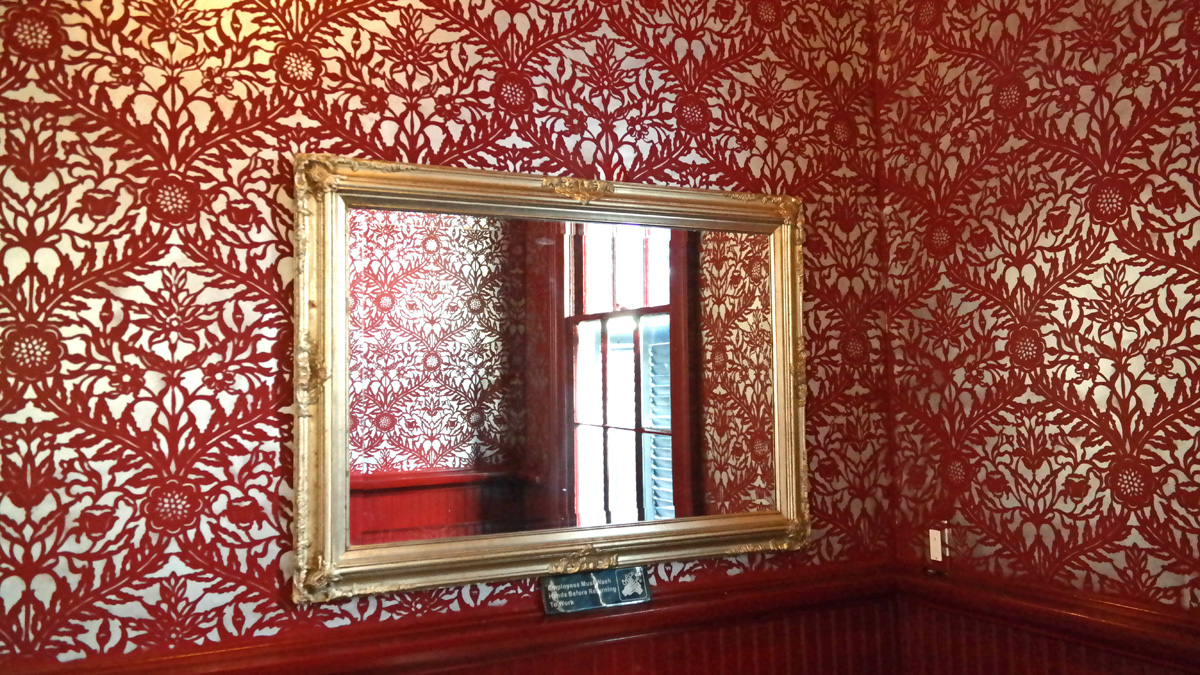 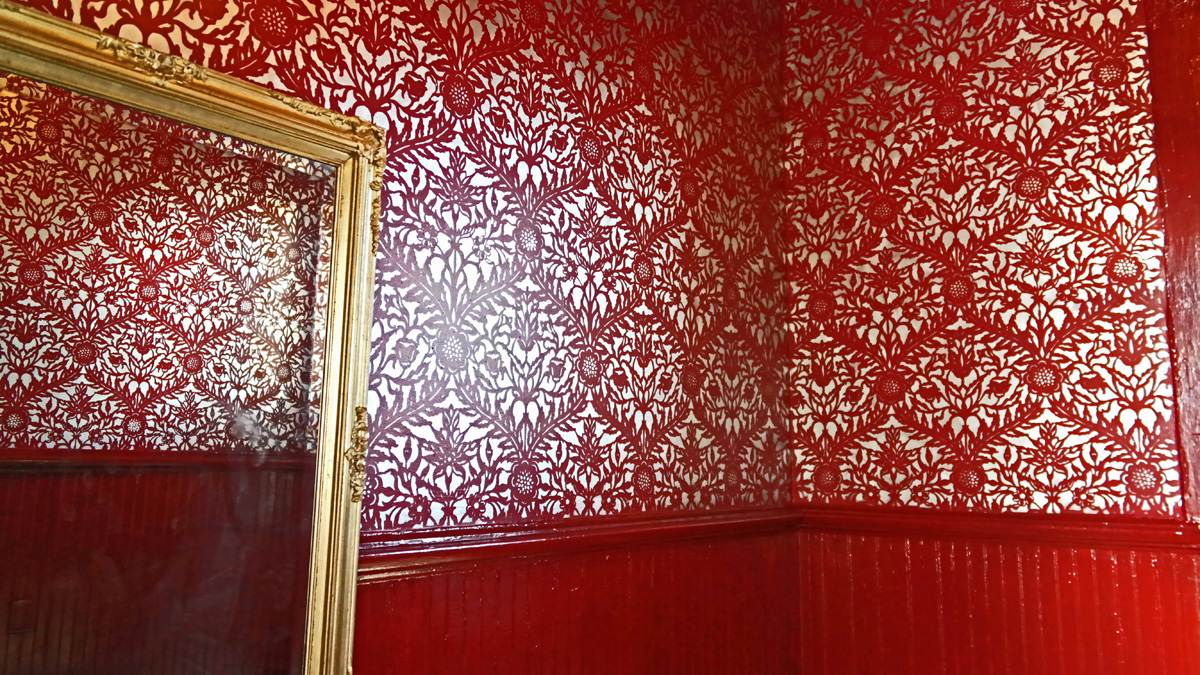 The owner had a vision for the upstairs bar in that he wanted it to glow in deep crushed rose tones. We developed a faux finish that emanates these color tones and brings exceptional depth and dimension to the walls. To finish the space off, which accentuates the walls from the reflection of the ceiling, we patinaed the new metal ceiling tiles to appear as they had been there from the buildings conception. This is a magical space in the restaurant and is something to behold during twilight. 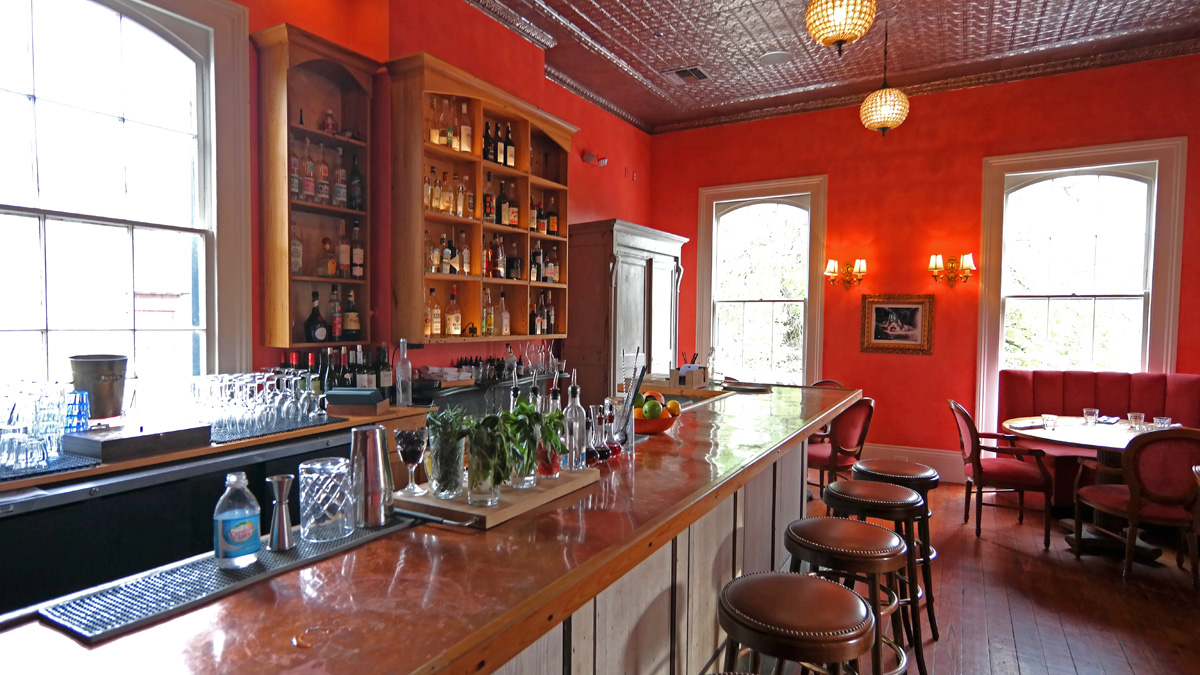 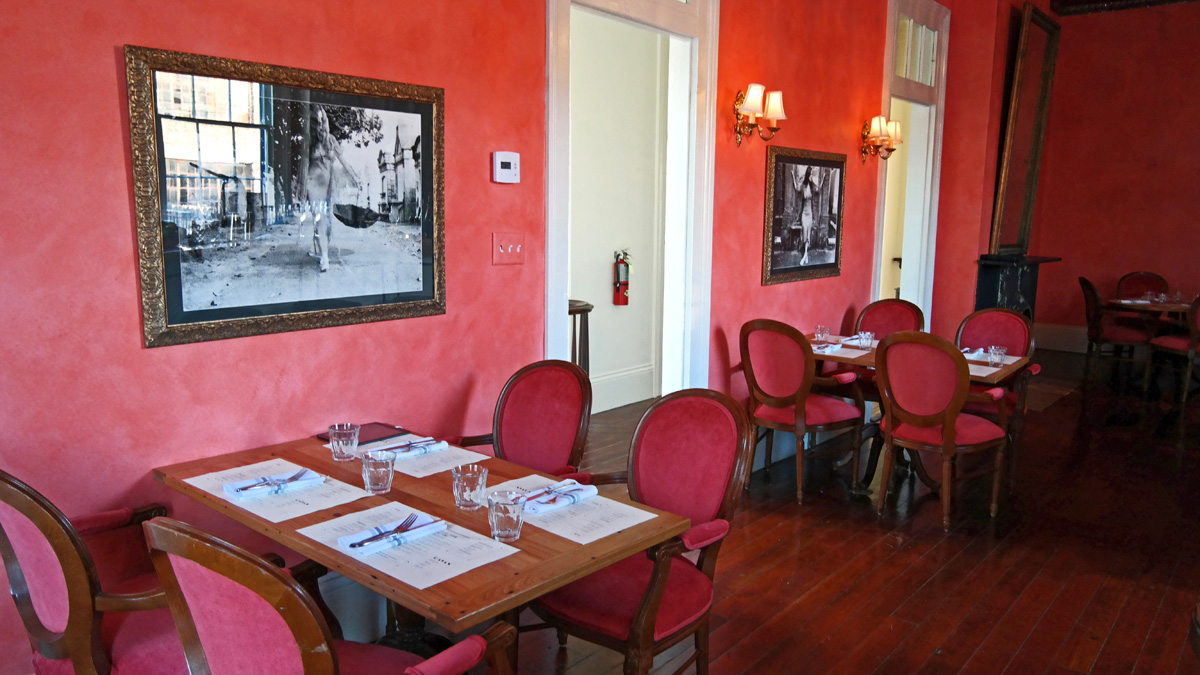 Overall, Cavan continues to garner rave reviews in the press and from guests not only for its excellent cuisine and hospitality, but also for its splendid ambience!

Some information on the structure from: Pg. 83-84 of New Orleans Architecture, volume VII, Jefferson City.