We recently had the great privilege of working on a centerpiece project for the Historic New Orleans Collection (HNOC). Now that the museum is open, we can share this exciting job with you! This was a multi-million-dollar project that was years-in-the-making. We were honored to be entrusted with this essential part of the project.

Sylvia T Designs was brought in to handle the finishes in the “Organ Room” (sometimes called the “Music Room”) of the historic Seignouret-Brulatour House located in the heart of the French Quarter at 520 Royal St. This room, within the majestic property, was the only one where the original 19th and early 20th century finishes were to be recreated. We were charged with bringing the room back to its unique and splendid grandeur. 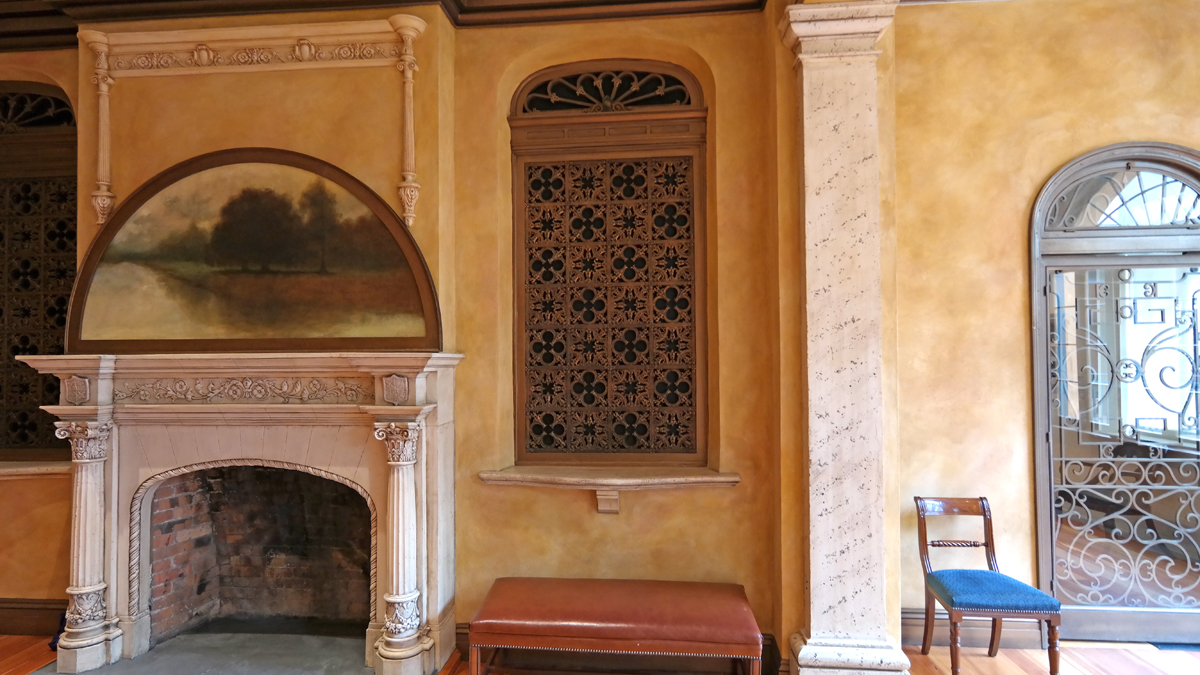 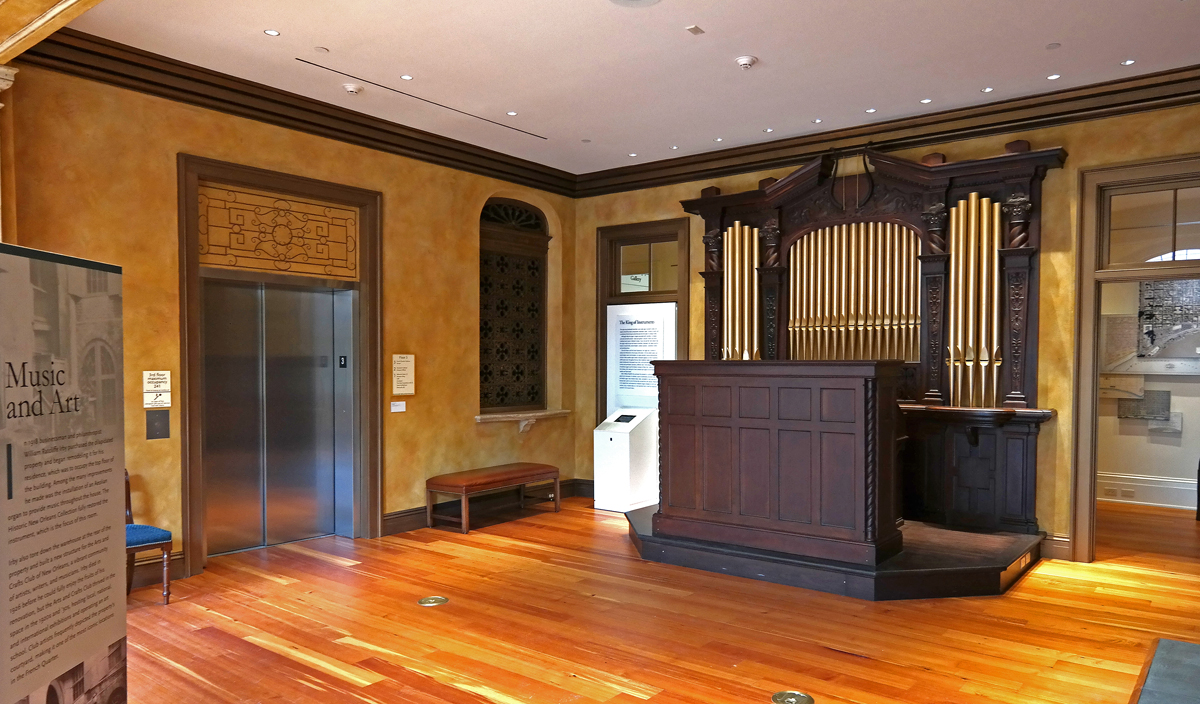 In being tasked with recreating and restoring the music room to it previous finishes, numerous elements of the space and adjoining stairwell required our attention, craft, and care! We needed to not only return the room to its original look, we also needed to use modern materials that were LEED certified as well as being more durable. This was due to the high volume of foot traffic the space will experience. Our long-standing experience and product knowledge with this type of work was instrumental in the job. 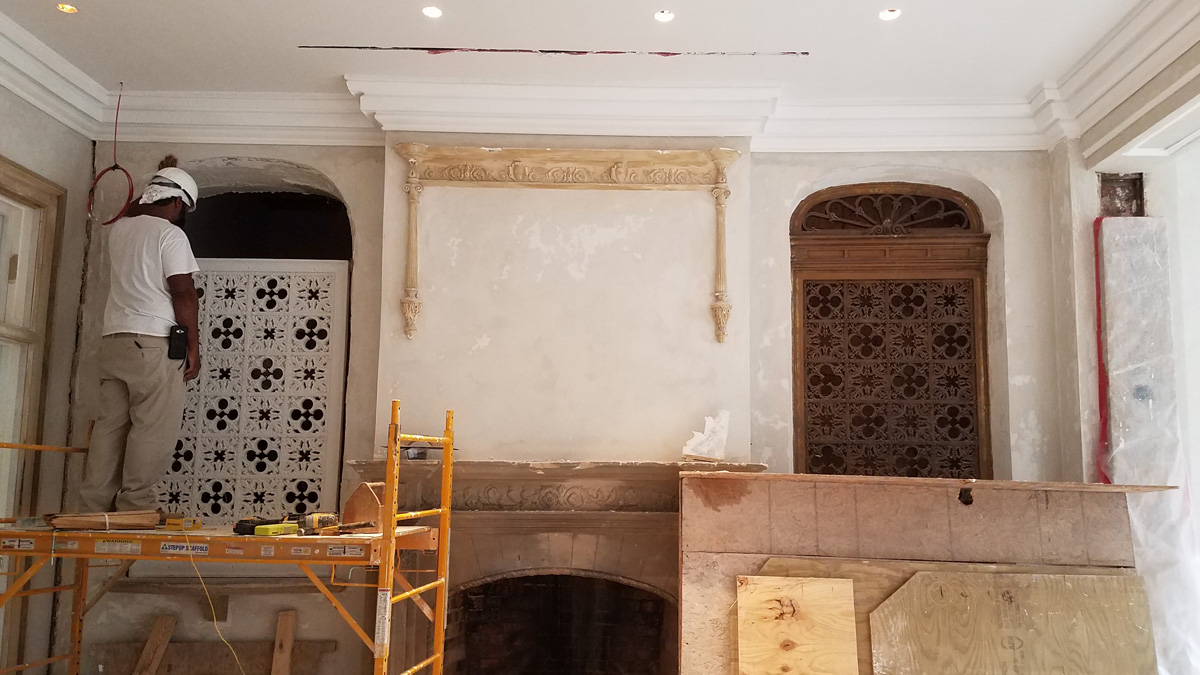 The walls presented a significant challenge. Both lime and gypsum plaster were used on the walls along with patched areas that needed the finish to be recreated and matched. This was delicate and took a great deal of effort and skill. This was due, in large part, because the mineral glaze used takes differently to each plaster type as well as to the patches. A great deal of care and time were given to properly layering the walls to ensure the finish work was consistent and cohesive.

The plaster features in the room also required great skill and proficiency to execute properly. First off, the room boasted two striking pilasters on opposing sides of the room. However, only one of the two initial ones remained along with its original pitting. A second was cast by a master plaster craftsman in the city, with whom we worked, but necessarily did not feature the pitting of the original. In order to achieve the appearance of the original, we employed a trompe l’oeil to create a convincing look (see the photo with the original at left and the newly cast pilaster at right.)

Another set of critical plaster elements found in the room was the ornate screens that sat in front of portions of the organ’s piping (and now houses piping and electronics of the restored organ). Only one of the three original screens remained in the room itself. The adjoining stairwell, which housed more of the organ’s components, had two. Other than their frames, these were also in need of recasting. 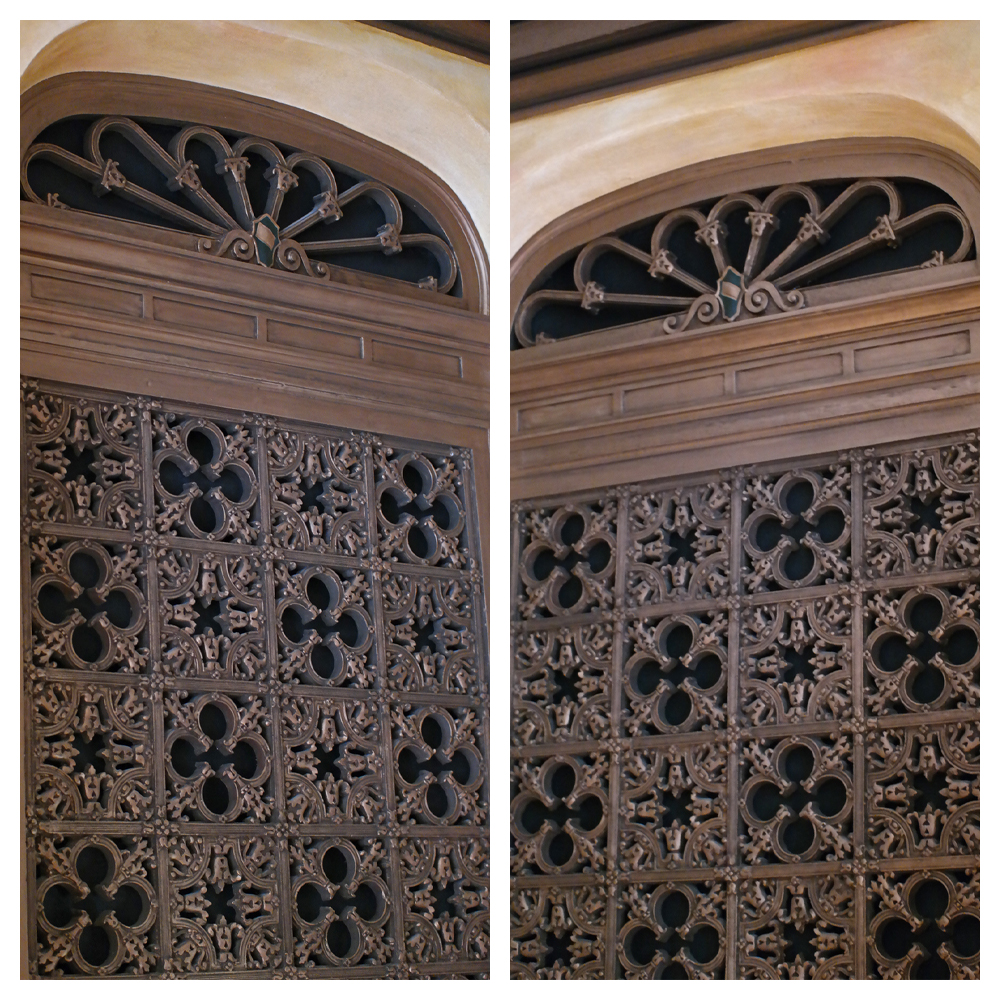 Pictured above – Screens – original at left, new at right – in the Music Room of the Historic New Orleans Collection’s Seignouret-Brulatour House. 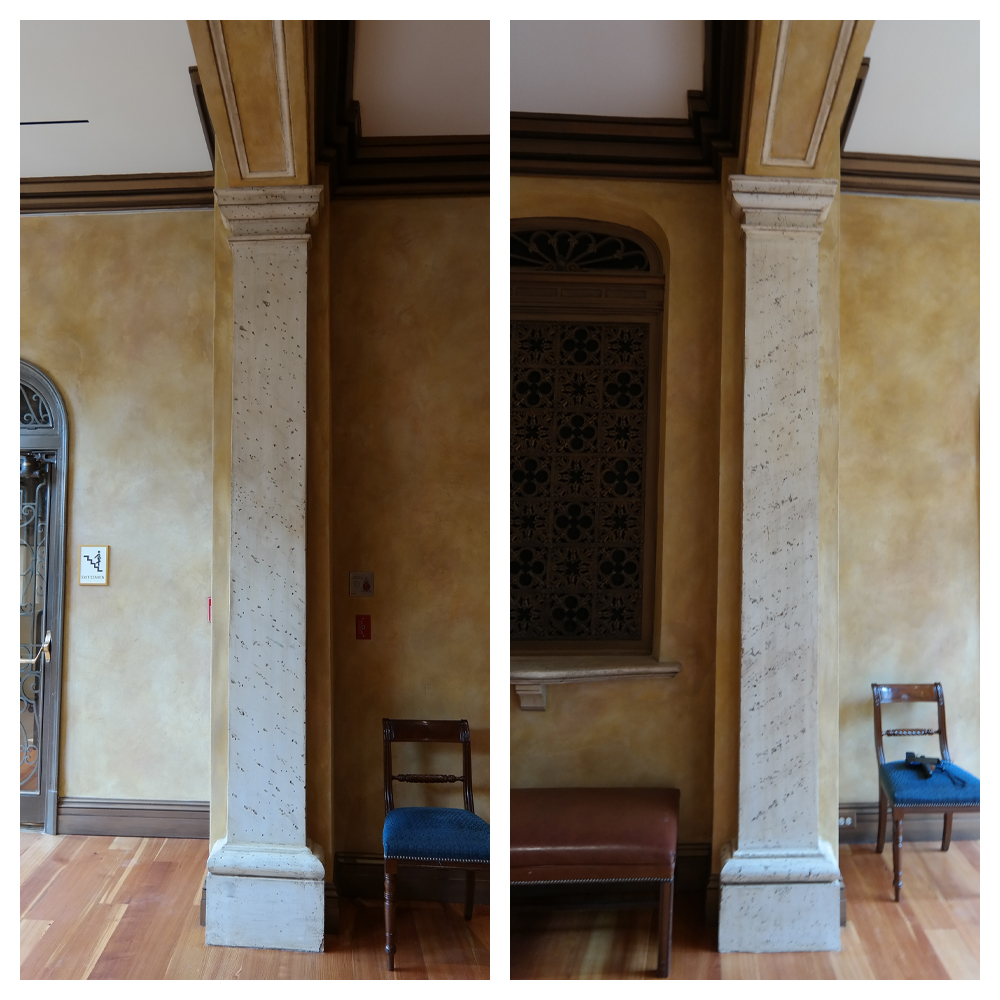 Pictured above – Pilasters – original at left, new at right – in the Music Room of the Historic New Orleans Collection’s Seignouret-Brulatour House.

The one original screen was in need of repair but still had its original metallic finish. We were able to successfully use this screen as our reference to recreate the finish on the others. Like the pilasters, it is nearly impossible to tell the difference.

The fireplace and hearth are also central features of the room. Like much of the rest of the space, they had fallen into significant disrepair. They suffered from sizable smoke damage and patching and had, overall, become dull in appearance. We cleaned and refinished the mantle to resemble how it would have appeared originally and applied a new plaster finish to the hearth that mimics the original stone bringing depth and dimension. 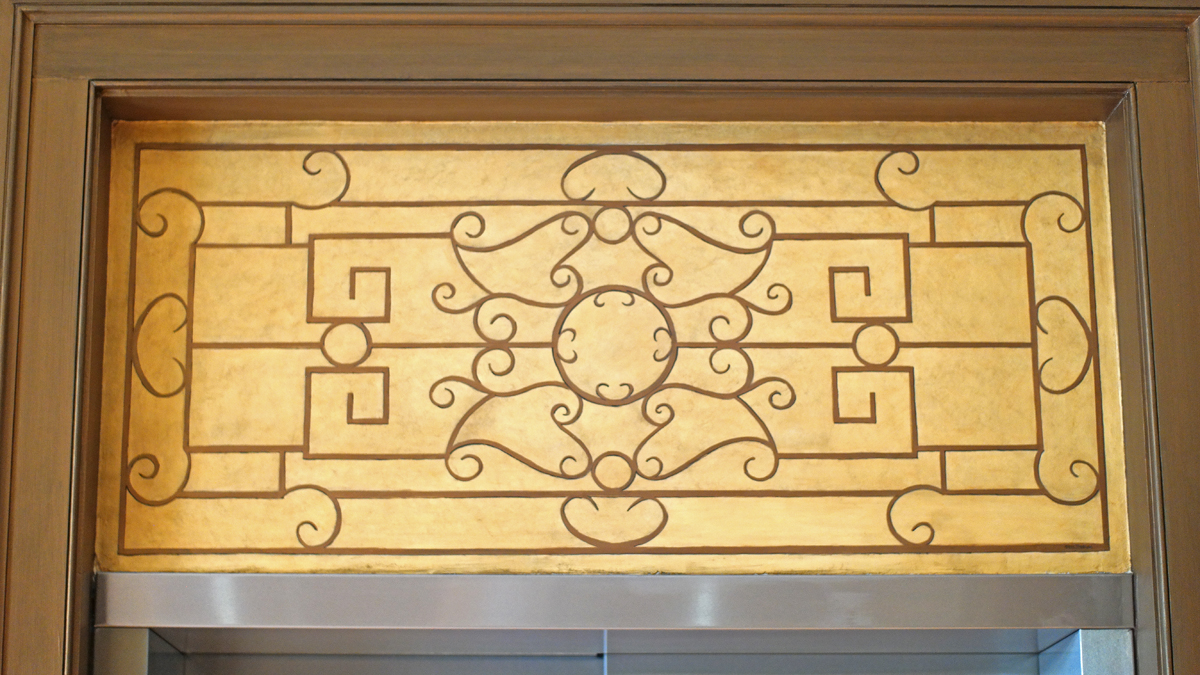 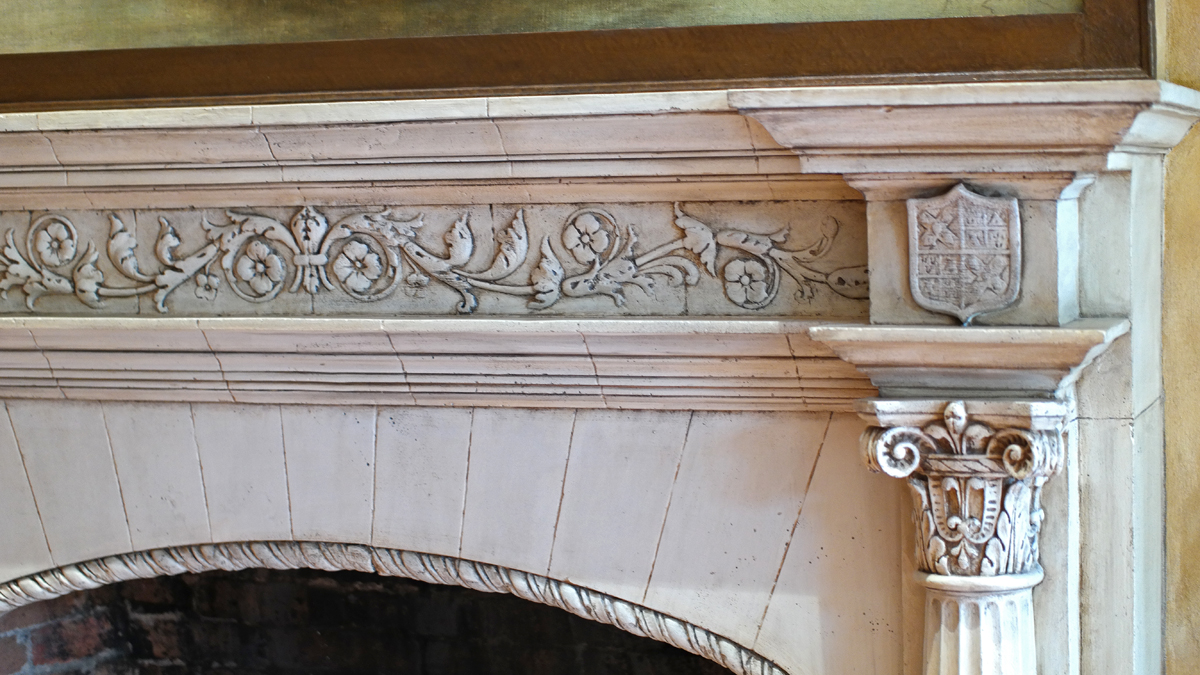 A small but striking feature of the room is the transom located above the elevator, which replaced the initial doors in order to facilitate access. It was designed to look and share the same “footprint” in height as the doors once did. The original doors were iron. We developed and hand-painted an elaborate scroll work that conjures their original form.

Lastly, we refinished the crown molding, baseboards, and door casings. Originally, the finish was a bronze metallic. The molding was casted-in-place and the casings and baseboards were made of wood. Our refinish work accurately depicts the original and matches across the three elements. 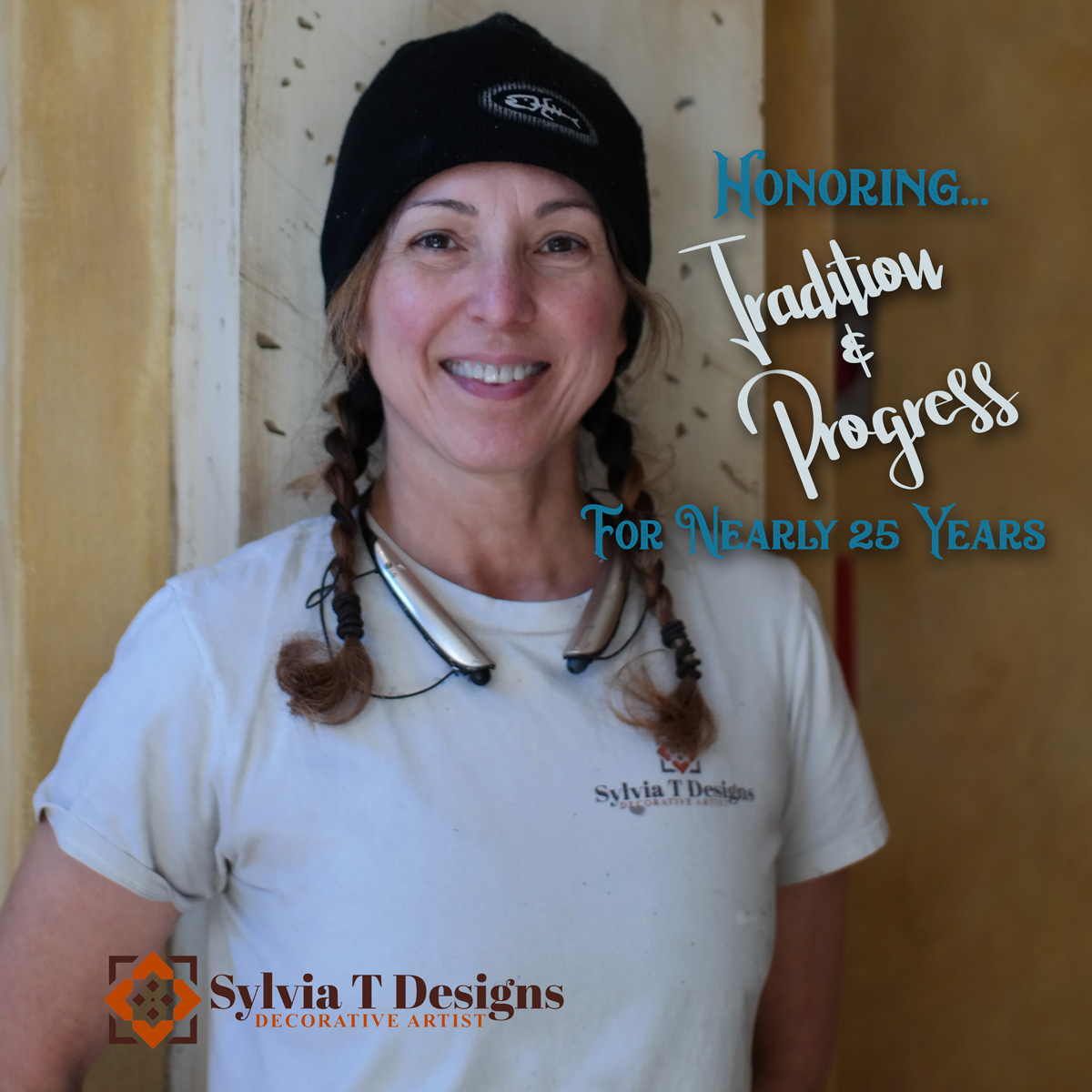 It was a tremendous honor and we were humbled to have been brought in to deliver on this landmark project for the Historic New Orleans Collection. The Seignouret-Brulatour House is now a centerpiece of this terrific organization’s holdings.

As they are “dedicated to the study and preservation of the history and culture of New Orleans and the Gulf South region of the United States,” this is in lockstep with what we do at Sylvia T Designs – “honoring tradition and progress” as we have done for nearly twenty-five years. As an original New Orleans firm, we understand the gravity of this and take this approach with every job we do, large or small, commercial or residential, historic or new construction. Let us know how we can help “make your space a work of art!”

Thanks to Bywater Woodworks, Waggoner and Ball, and, of course, The Historic New Orleans Collection. See more on the Seignouret-Brulatour House and how you can visit here.

More on the Seignouret-Brulatour House

The house has seen many changes and alterations in its long life, which began in 1816. Originally, built by François Seignouret, it served as his not only his residence, but also his furniture and upholstery store. A noted and in-demand furniture maker (his work is still sought), Seignouret arrived in New Orleans from France in 1808. Later, he also operated a wine importation business from the location.

His heirs remained in the house for some time after his death in 1852 (he had returned to France to manage his wine business.) They sold the house in 1865. It was then purchased by another wine importer, Pierre Brulatour, in 1870. It was his place of business and residence until 1887. The house draws its name from these two key figures in its early history.

The property changed hands a few times and fell into significant disrepair until 1918 when it was purchased by William Ratcliffe Irby, a noteworthy figure in the American tobacco industry. During his tenure, Irby carried out considerable remodeling of the property. This included the installation of a grandiose pipe organ and other extensive work, including a ballroom, on the third floor in the 1920’s.

The third floor was always intended as the primary residential space, which also meant an area for entertaining and hosting. Seignouret occupied the floor until he returned to France in the 1850’s and Brulatour inhabited the floor until his death in 1880.

Under Irby, the property became the headquarters for the “Arts and Crafts Club of New Orleans,” part of the city’s growing Bohemian scene in the 20’s and 30’s. The club leased the rear building. Though Irby intended to live in the house, he was unable to do so before his passing in 1926. Of note, he was an advocate during his time for the revitalization of the French Quarter and was instrumental in saving several of the neighborhood’s structures including St. Louis Cathedral and the Lower Pontalba Building.

The advent of television ushered in the next significant era and development of the Seignouret-Brulatour House. The Stern family, who operated WDSU, the city’s first TV station, purchased the property in 1949 and moved the administrative offices there during that year. By 1950, the station was fully operational in the space with their television studio operating on-site as well.

The station maintained the third floor’s graceful appearance until they moved out by 1998 – though they did cover the music room’s finish, created during Irby’s renovation, with paint. After the building was left vacated in the late 90’s, it began to suffer from decay and disrepair. The third floor, experienced significant paint and plaster deterioration. The music room, which was the most elaborately finished area of the building, had suffered from much of this and required significant efforts to restore it back to life – our work!

HNOC purchased the property in 2006 with plans to add it to their campus. In 2014, archeological, restoration, and construction work began. The $38 million expansion adds some 35,000 square feet to their holdings. Its 12,000 additional square feet of exhibit space doubles their current offerings.

Additionally, it is a state-of-the art facility that is up to the challenge of protecting and displaying HNOC’s important collection of artefacts and open for all to enjoy. The Seignouret-Brulatour House features interactive displays, a museum shop, a café, and much more!